Kaohsiung Pride Parade: 10th Anniversary Is Coming! How Are You So far?

Hello dear friends, how are you these days?

Get ready—this year Kaohsiung Pride Parade will be celebrating its 10th anniversary! Do you remember what your aspirations were when you first started participating?
​
At the first pride parade, former Kaohsiung mayor, Chen Chu, proclaimed “Love is a human right!”, and policies such as marriage registration of same-sex couples, unisex restrooms, and public hearings on gender equality education were enacted. LGBTIQ+ civic activities have been held annually and now we see that Kaohsiung is transforming into a city of human rights.

However, to this day, anti-gay entities continue to mobilize people through fear, using volunteers on the streets and social media chat groups to spread incorrect and misleading information. Despite this negativity and disinformation, on May 17th (designated the International Day against Homophobia, Transphobia, and Biphobia), Taiwan's Legislative Yuan passed a bill entitled the Enforcement Act of Judicial Yuan Interpretation No. 748 that gives same-sex couples legal rights through marriage registration, making Taiwan the first country in Asia to legalize same-sex marriages.

After achieving the major goal of marriage equality, we often hear a question like, “Why do you we still want to march even after same-sex marriages have been legalized?” Although we did succeed in making a great Asian region and national level change, has the gay rights movement truly ended?

No, it hasn’t. Yes, some legal rights for same-sex partnerships have been attained, however much of the public still views the LGBTIQ+ community with confusion or trepidation. In terms of the pride parade, they watch but often still don't understand why there is a need for the parade, many judging parade participants with mainstream ideologies.

In the past, we have been able to temporarily tolerate the mainstream negativity and aggressive tones, cover up different body types, and camouflage the sexual elements of our parade to achieve the marriage equality goal. But face it, pride parades have always been a method to campaign sexual politics, and to show that Nature's creation—our beautiful bodies, one and all—is a significant component of pride parades throughout the world!

For the 2019 Kaohsiung Pride Parade, we will show our region and Taiwan the people we are proud to be. Whether slim or chubby, healthy or handicapped, standing or sitting, male, female, or in between, whatever the body type, ideology, and gender role—all are welcome to freely express themselves, generating public awareness of the existence of non-standard body shapes and that desires are not limited to people who have the ideal body shape.

Regardless of the widespread belief that people should accept themselves and others as they are, mainstream media mostly still focuses on the idea of perfect, toned, and scantily-clad bodies every year. This belief even exists among some members of the LGBTIQ+ community. Of course, stereotypes exist everywhere with everyone, in some form or another. What we want to encourage is that mainstream people try to recognize that just as they have their own differences, these differences also exist in sexual minorities. More importantly, that such biased impressions are often harmful to those being judged.

Legalizing same-sex marriage is not the end of the movement. Are you still on board to work with us towards a society with equal rights? 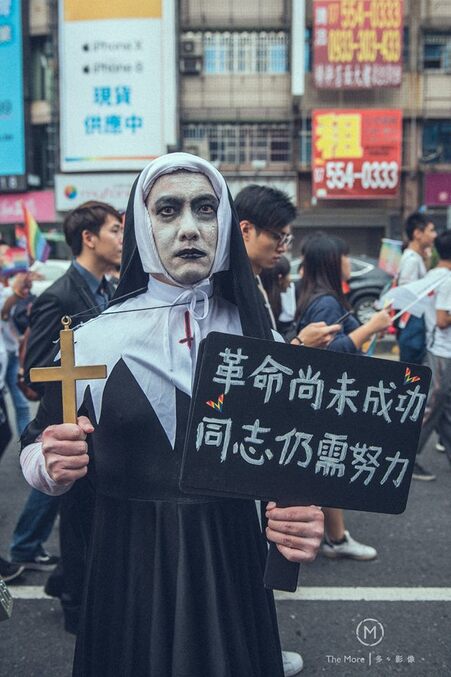 The Kaohsiung Pride Parade has always been an entity that gathers people to guard and fight for the rights of sexual and gender diverse communities, being positive support for fellow sexual minorities. We need to keep the conversations going regarding discrimination and the stigmatization of sexual minorities. That is why we continue to parade on the streets.

We believe the Kaohsiung Pride Parade not only shows society the existence of LGBTIQ+ people, it also encourages interaction among different gay communities, plus serves as a platform for dialogues with the public. Communicating with the public is important, and it is even more important among the various LGBTIQ+ communities. This is the only way we can return to our original intent when we held the very first parade. This is the only way we can find a common space for each one of us to stay on board with the same goals, working together for equal rights.

​What have you been up to, you people who participated in past Kaohsiung Pride Parades? Do you remember why you joined us in the first place? No matter what your reasons were, join us again this year to advocate and continue the dialogue for different gender issues! Come to the parade and let’s move forward together!